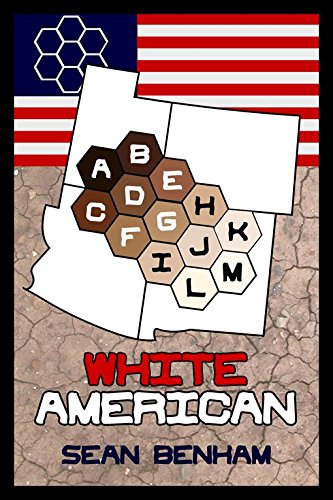 White American is a special slice of weirdness. Imagine that 'The Catcher in the Rye' had been written for 'Heavy Metal' magazine and you've got a good starting point for what to expect. It's a classic coming of age story, turned on its ear and shoved to the ground.

Son of Satan and Grandson of the Messiah, Billy Lopez was born with a sordid lineage, an ancestry that has been veiled since birth. Now, he's a wanted man, forced to flee the only life he has ever known… and where he's headed isn't pretty.

Born into The United Prefectures of America, a colony doubling as an experiment in severe racial segregation, Billy was destined for a life of state-controlled mediocrity until he let the most benign element of his forbidden heritage slip. As a white teenager surreptitiously raised in an all-brown Prefecture, his cover has been blown. He has to leave the upper crust privileges of F Prefecture behind and make his escape into M, a dirt poor, bone white Prefecture. One that isn't listed on any map.

Forced into a harrowing new world of extreme plastic surgery, black market pornography and organized religion gone horribly awry, Billy has to keep his wits about him in order to keep his head on his neck. M Prefecture is best known for two things: cheap life and grisly death. Driven by the mix of divine and profane blood that courses through his veins, he strives to learn the truth about himself and his new surroundings, truths his sheltered upbringing kept hidden. What Billy finds out about M Prefecture is ugly. What he finds out about himself is downright disgusting.

Bizarre body modification, heartless colonialism, an obscene lottery, God gifted supernatural powers, Rooster Liquor, a track meet, toilet powder, Powerblonde Eterni-coifs... White American has a little something for everyone, and a whole lot of sci-fi goodness for those who like their fiction bizarrely inventive.

An adventure spanning 15 decades, 3 continents and 3 generations, it's both wide ranging and intimate. (And maybe even relatable... if you know a cast of deformed miscreants). Poignant, funny and a little bit gross, White American is one hell of a novel!